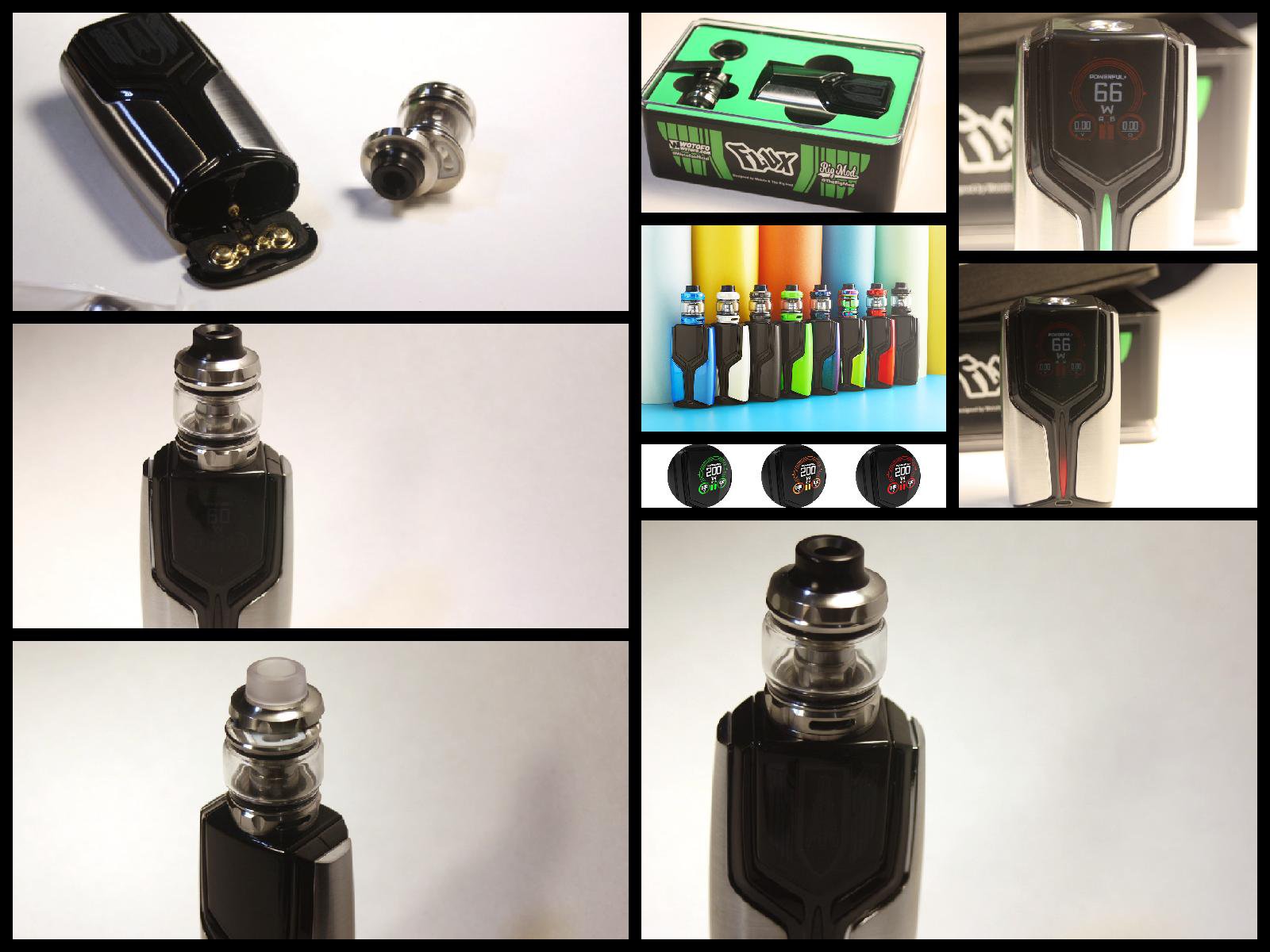 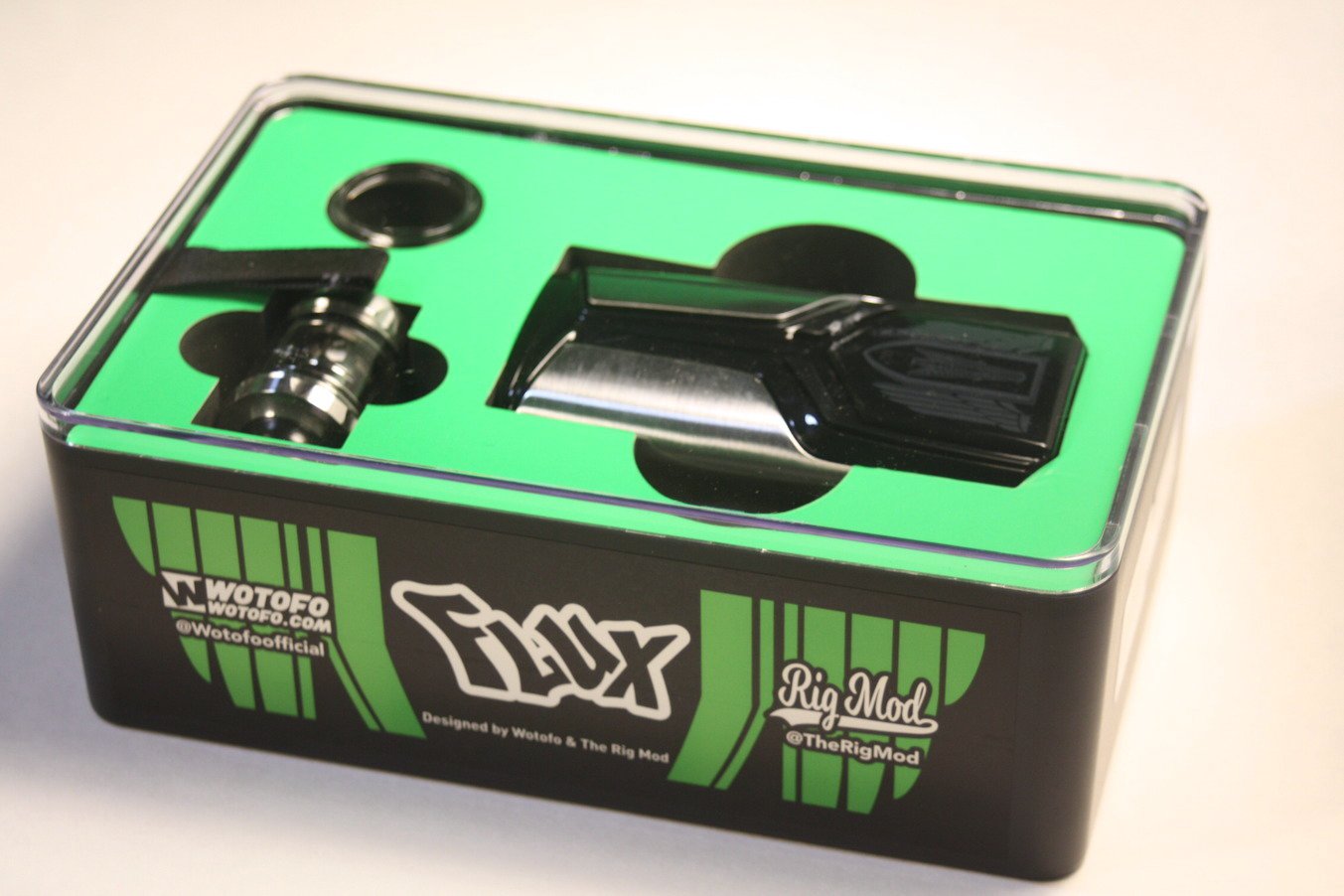 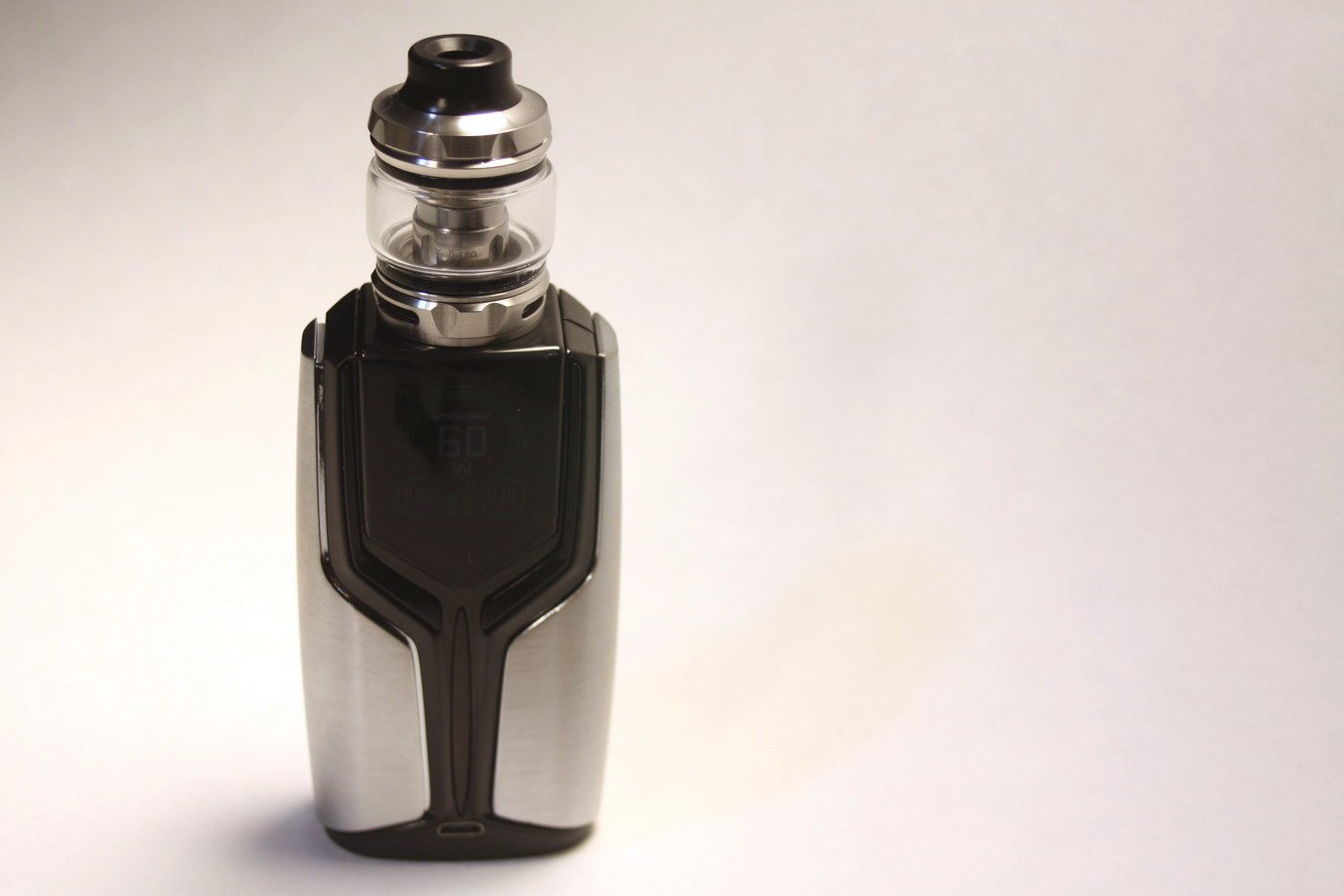 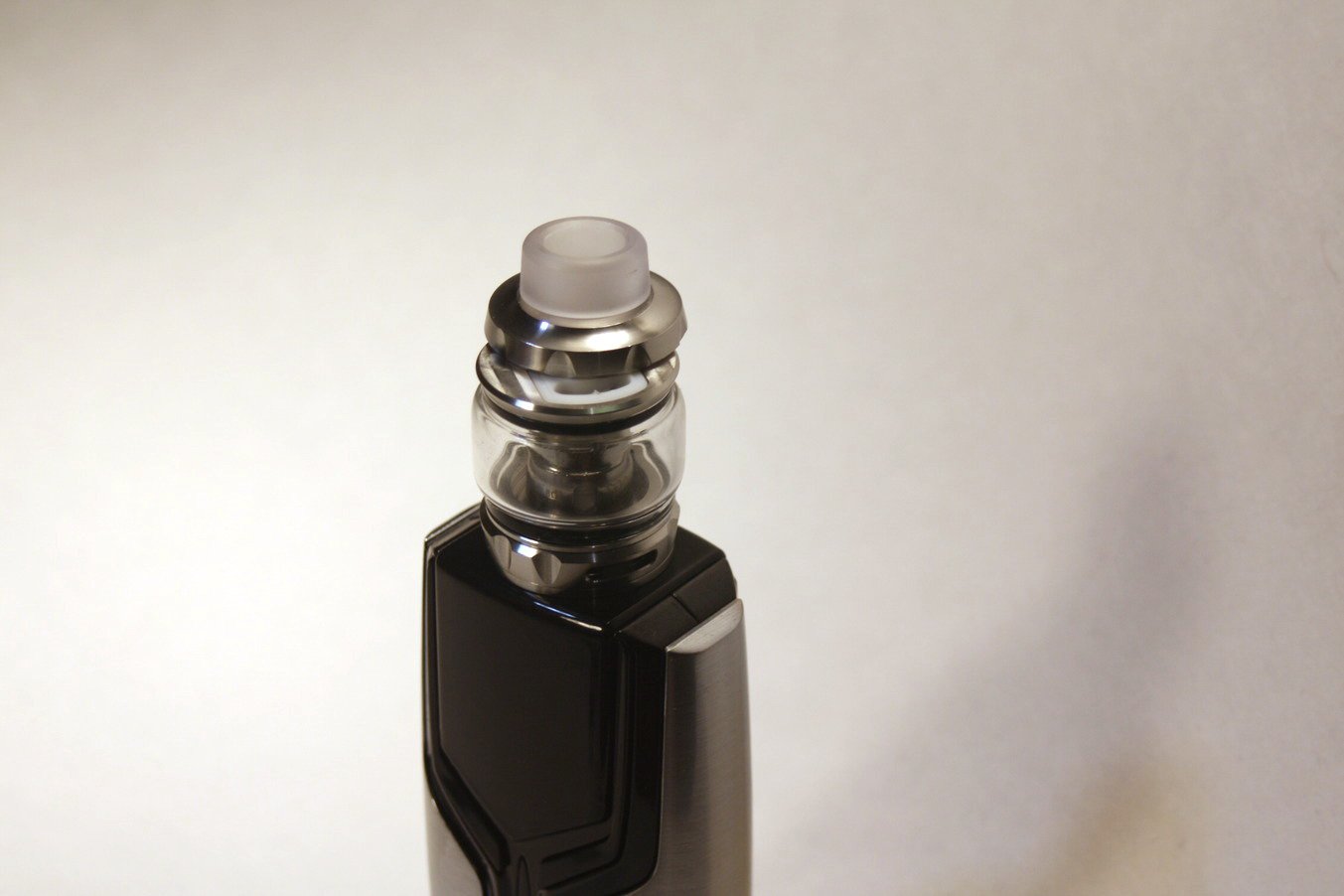 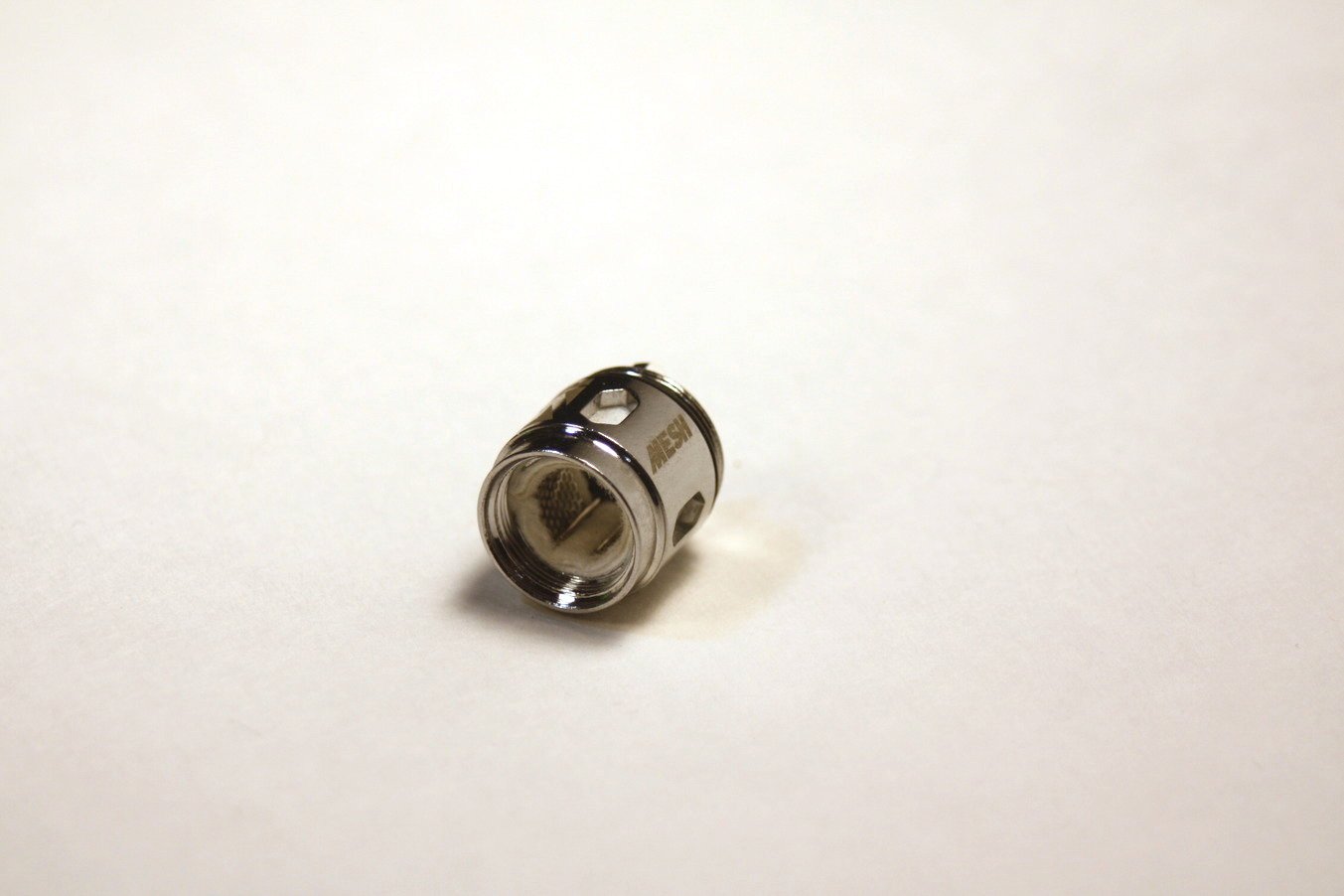 Wotofo makes the Flux kit available in several vibrant colors, with matching mod and tank, that will suit pretty much everyone. We are reviewing the stainless steel version, but all the classic colors are available including a very cool Wotofo green edition.

As a quick side note, the large plastic box packaging Wotofo used is really a nice touch. The contents are well protected during shipping and you have a nice little storage box after unpacking.

The Wotofo Flow Pro is a pretty good triple airflow mesh coil sub-ohm tank. It has some good features that make this tank a pretty good fit for any vape setup, so it isn't surprising that Wotofo picked it for the Flux kit.

At the top, one of the first noticeable design cues is the curved 810 drip tip that matches the curve of the top cap of the tank. The contoured tip feels comfortable when taking a drag but the shape makes it a bit hard to remove but using a finger nail helps.

Filling the Flow is pretty simple with the swivel top that slides open when pressed to reveal a large fill port well suited to unicorn tips and glass drippers alike.

The top of the tank has a consistent look all the way around. It has some knurling around the edge that is a bit misleading, making one think it is a screw top at first glance. There isn't a marking indicating where to press, so there is a bit of a search occasionally involved.

The top o-ring on most tanks, RTA or sub-ohm, have a similar placement as well as the same style as the bottom o-ring but this tank is a bit different. Just under the top of the glass there is a smaller round o-ring placed in a thin milled crevice instead of the the standard placement of a flat o-ring between the top edge of the glass and the bottom edge of the cap section.

This placement makes the glass tank stick at the top when trying to get the glass off for cleaning and swapping to the bubble glass, perhaps due to the fact the o-ring is round. Dealing with this particular o-ring was a minor annoyance.

Pre-installed on the Flow Pro is the standard straight glass tank that has a 4ml capacity and included is a larger 5ml capacity bubble tank. The bubble glass looks decent and that 25% increase in capacity makes a difference with this tank.

This tank produces so much vapor that the Flow Pro is a bit of a thirsty beast.

Vapor production is huge thanks in part to the large amount of airflow available on each pull. At the bottom is a triple airflow system with wide air ports. The adjustment ring has notched divots for gripping, is stopped in either direction and has a firm amount of resistance.

While the triple airflow system provides a smooth draw, it is a bit loud. At three quarters to wide open, there is lots of vapor for a wet, billowy cloud and half way open provides a warm, dense vape with bit of a flavor boost. 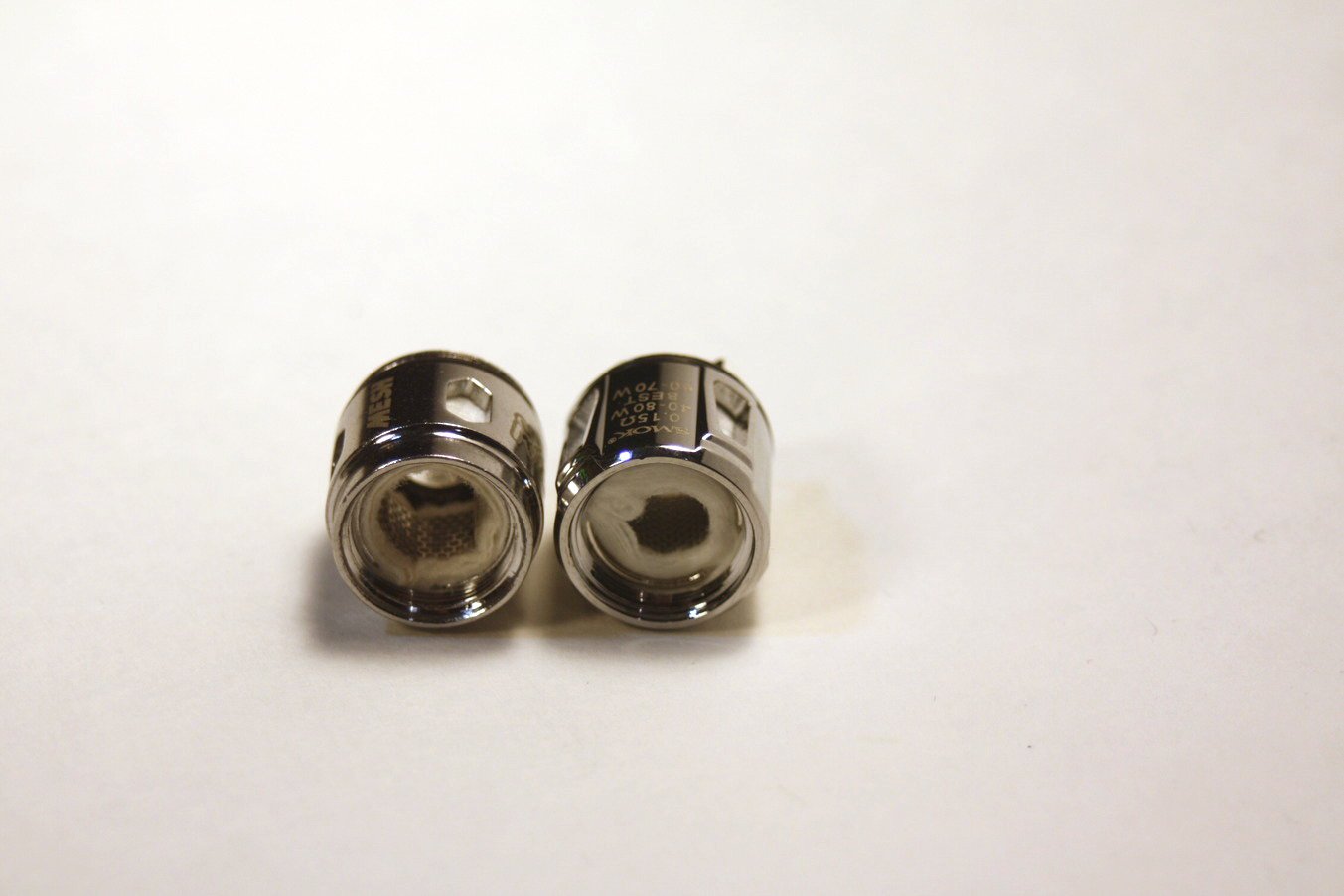 Included with the kit are two 0.18 ohm mesh sub-ohm coils, one pre-installed and one in an accessory bag. These coils are labeled 40-60W for best performance but 50 to 55W seems like a pretty good sweet spot for a warm vape that isn't too hot.

Standard mesh configuration is more like a screen or grid of wires but the Flow uses a stamped mesh that looks more like a net. It seems like this type of mesh pattern may provide for a little more even heating than the regular wire mesh style. This pattern are the same stamped style used on the Wotofo mesh RDA strips and Smok refers to the design as strip style.

Flow Pro can take the very common baby beast coils from Smok in addition to the standard mesh Flow coil. Just take one of coils down to the old Brick and Mortar to get a good match.

The included mesh sub-ohm coil has huge cloud production with good flavor. The airflow opening is quite a bit larger on the Wotofo coil than the comparable Smok baby beast coil.

With the Flow Pro, the vape experience is a pretty good all around with a balance more for direct lung hits for cloud chasers. One can always cut the airflow down a bit to get a flavor boost, but wide open is just more fun on this particular tank.

Overall, the Wotofo Flow Pro mesh sub-ohm tank provides an enjoyable vape experience, particularly for those of us that like huge clouds and lots of smooth airflow for giant lung hits. The coils last long time without degrading performance wise and are easy to find thanks to the cross-compatibility.

The Flux is a wattage only mod. While a lack of temperature control may be a downside for some advanced users out there, the vast majority of vapers, use wattage modes exclusively, particularly with sub-ohm tanks.

Another bonus to wattage only on this mod is the watts only increment by single watts only, no halves or tenths of watts, which is great.

The mod comes with a tinted color screen and customizable vertical LED lighting under that lights up when fired.

This mod features an easy to read display and simple menu without an endless amount of settings to figure out. A pretty much a set the wattage and vape away type of device. Pretty much the only settings are for the wattage, firing mode and LED lighting options.

This mod has a very fast startup and automatically turns on after a battery change, which is just a huge quality of life improvement. Upon squeezing the satisfying, clicky fire bar, the mod fires very fast and has pre-boost settings for even quicker hits.

There are three firing (pre-boost) modes: standard, powerful and powerful+. These modes initially fire at a slightly higher wattage initially then ramp down to the set wattage level which enables the vapor to start producing faster.

On standard (green) mode, this device is already very fast firing, the other firing modes just boost the coil heating a bit. When the firing mode is changed the color scheme changes to indicate the firing level, green is standard and red is the highest boost.

To match the black bezel through out the center of the mod, the screen has a black tint. When off it just looks like shiny black, but when the screen is on the colors shine though. While the tinting makes the screen to indoor usage, it can make the screen seem dim in direct lighting or in a bright outdoors situation.

Wrapping around the bottom of the screen are the down and up buttons which really seem to accent the design cues instead of just sit there, which is a nice touch that is pleasing to the eye.

To disable the buttons (key lock) press the "down" (left) button and "up" (right) button, to get into the menu press fire and "down" and to change the fire mode press fire and "up". The mod also features the standard five fire button press power sequence. 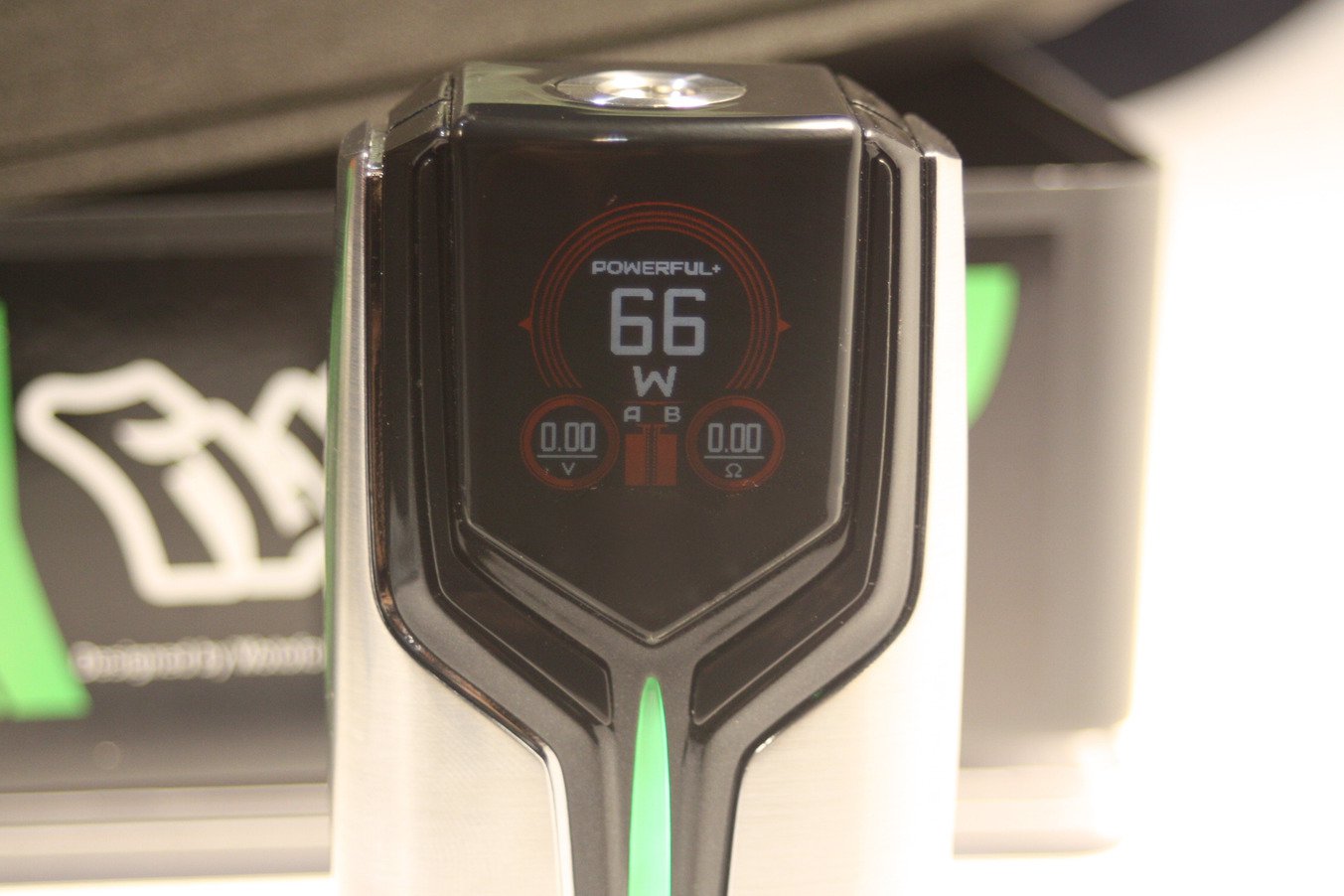 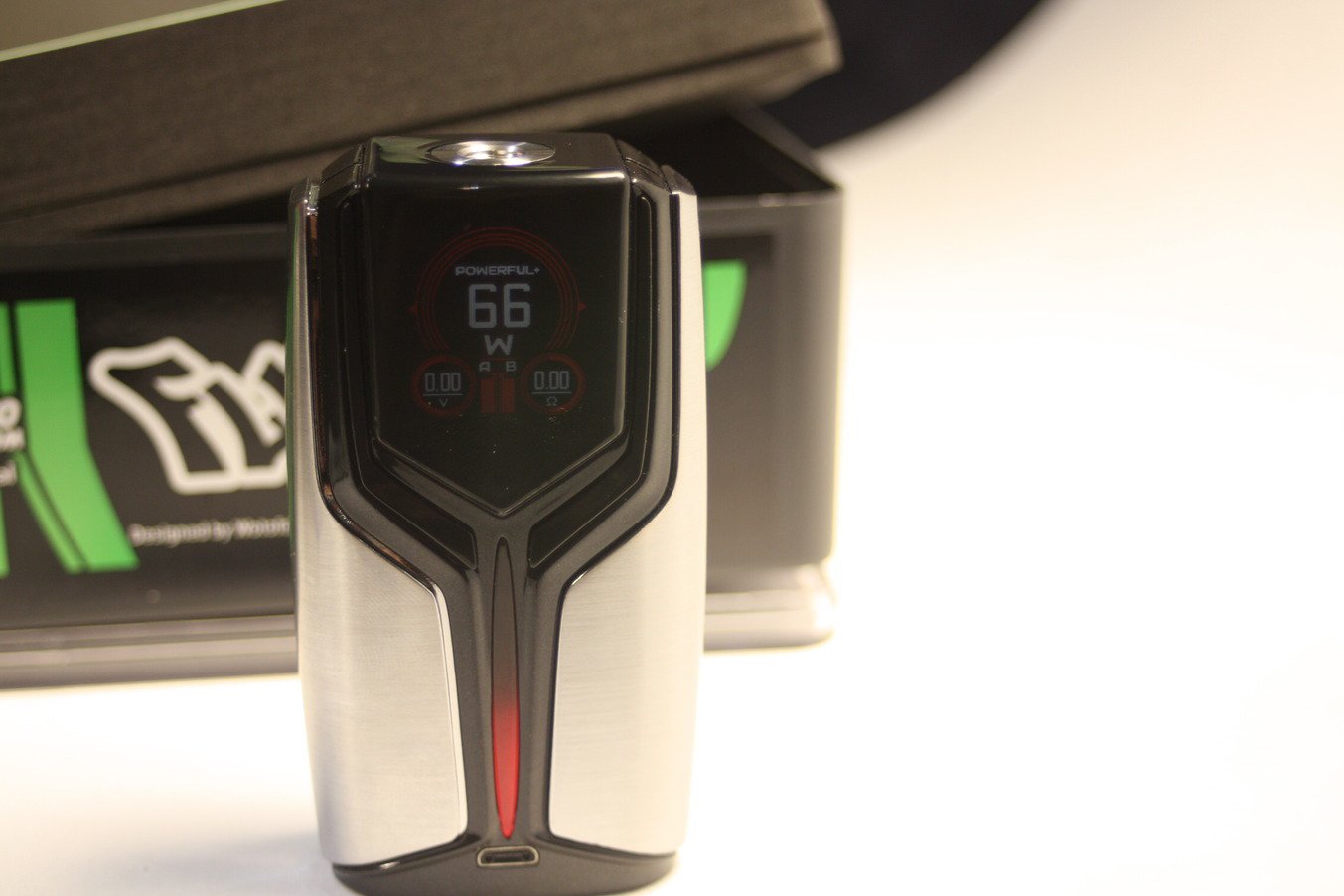 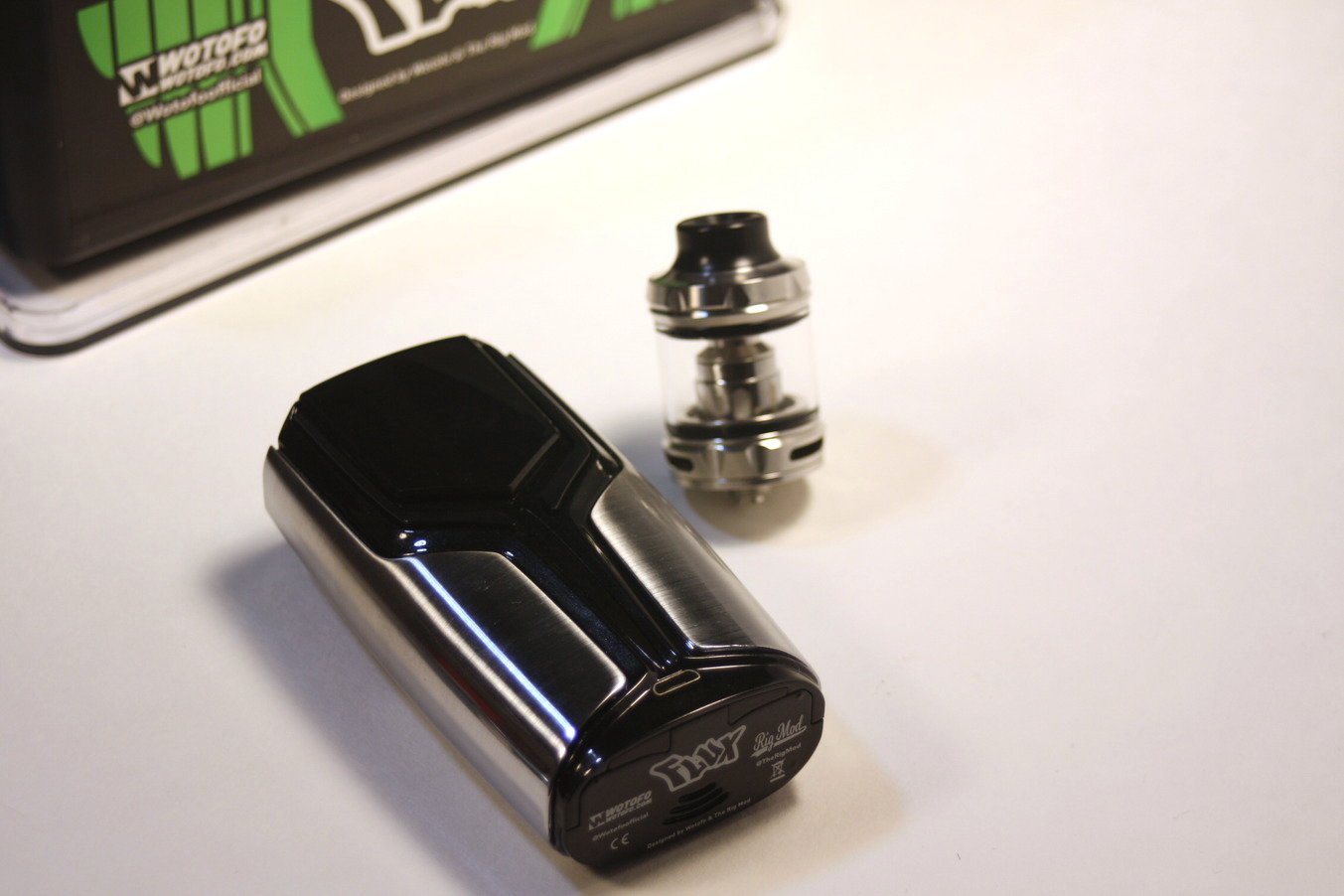 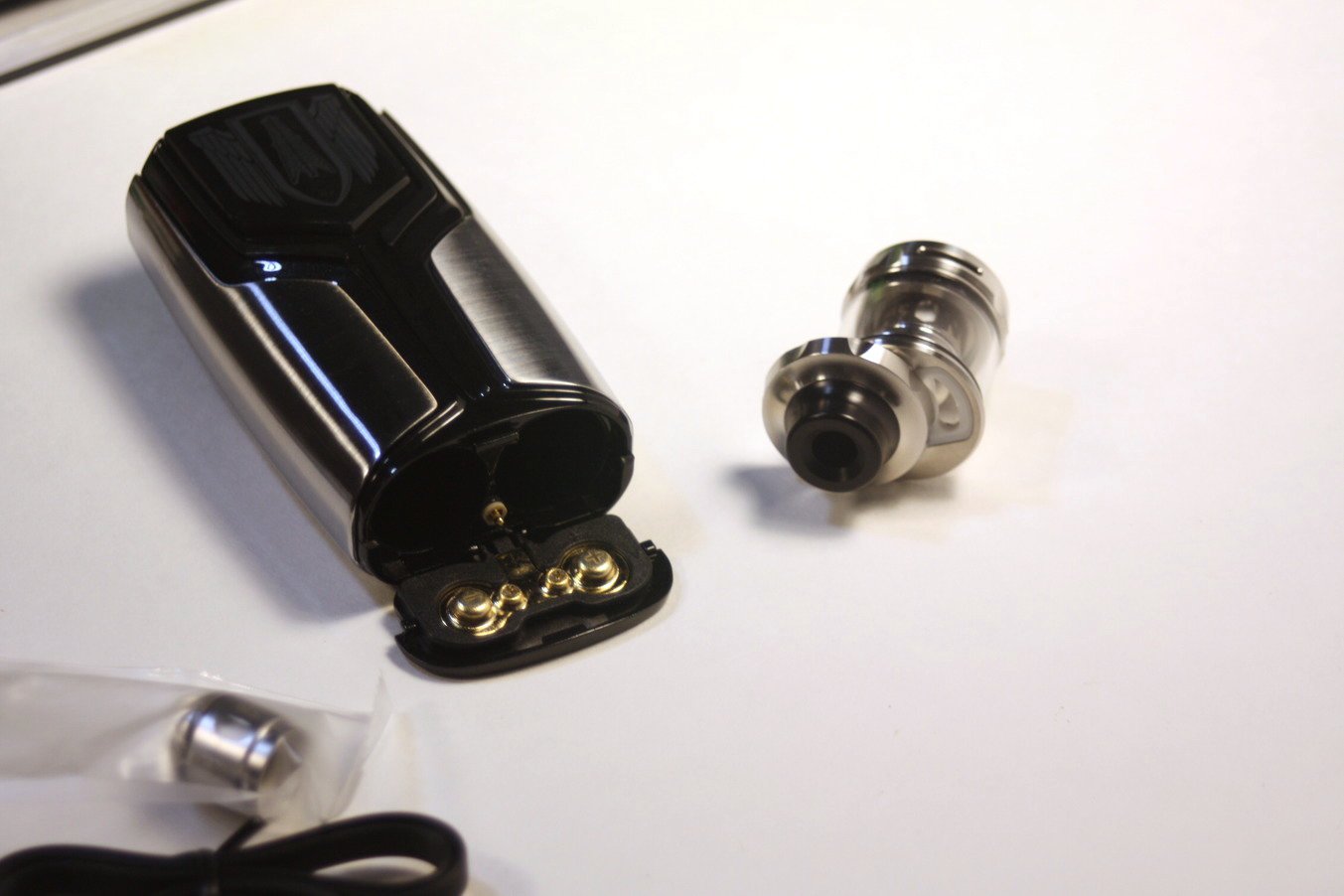 The menu system is just as simple to use as the rest of the device. Simple, thanks to the fact the only settings that are changeable control the vertical LED indicator strip underneath the screen.

There are several colors and lighting patterns to choose from to suit your taste. Match the color to the paint or match it to the screen and change the flash to breath mode.

Flash is probably our favorite LED setting as the light loads from the bottom to the top when the mod fires like a power meter. With the breath option, the entire LED strip goes from dim to bright and back.

Wotofo cleverly blended the LED strip into the face plate in a way such that it isn't really noticeable when the lights are off. Disabling the work light is simple if that isn't your thing.

The lighting also has a standby mode that kind of flashes until the unit goes to sleep but we found that it is a unneeded additional setting and is best disabled.

Centrally located on the top of the mod is the spring loaded 510 pin. The placement of the connection and the width of the device make tanks up to 26mm in diameter a good fit without overhang. 28mm and larger diameter tanks or RDAs will experience some slight overhang.

Some mods have some battery or button rattle when given a good shake but everything fits tight on this mod. While there isn't any rattle the fire bar gives a little bit of a metallic clink when tapped with a finger nail.

The side mounted fire bar to the left of the screen protrudes a slight amount more than the corresponding side plate.

Like most squeeze fire mods, the two batteries load into the bottom, secured by a hinge style door. The finger gripping on the bottom of the door doubles as a stylized battery venting system.

Unlike some other hinge doors, this one doesn't have any side to side play and secures tight.

On the under side of the door, the brass colored battery contacts are marked with positive and negative indicators. There aren't any markings at the bottom of the battery wells, which would have been a nice bonus just for added user clarity.

One of our favorite features of this mod, complementing the fast start up, is the automatic start after fresh batteries are swapped in. What a  huge quality of life improvement!

The Wotofo Flow Pro is a pretty good tank that is a real cloud chucker with lots of smooth airflow, long lasting coils and decent flavor. The ability to take the super common Smok Baby Beast coils is a huge plus.

However, the real star of this starter kit is definitely the Wotofo Flux mod. It is powerful, easy to use, comfortable to fire and looks fantastic.

Wotofo and RigMod have produced a well designed mod / vape starter kit with great aesthetics, comfortable hand feel, readable color screen, simple menu system and strong performance. Easy to use, powerful, lots of vapor: what is not to like?

This is a really great starter kit that is perfect for beginners and vapers that just want their stuff to just work right away! 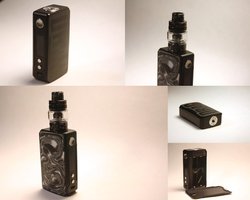 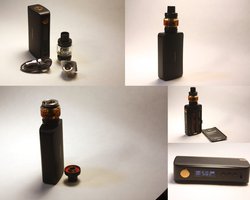 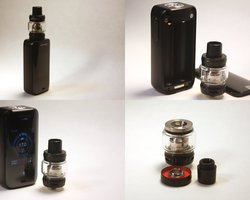