The Wotofo Bravo is a killer 25mm flavor RTA with lots of cool features, including a clamp style build deck, bottom airflow slots and it performs like a champ! Great flavor, huge vapor and it is easy to build! 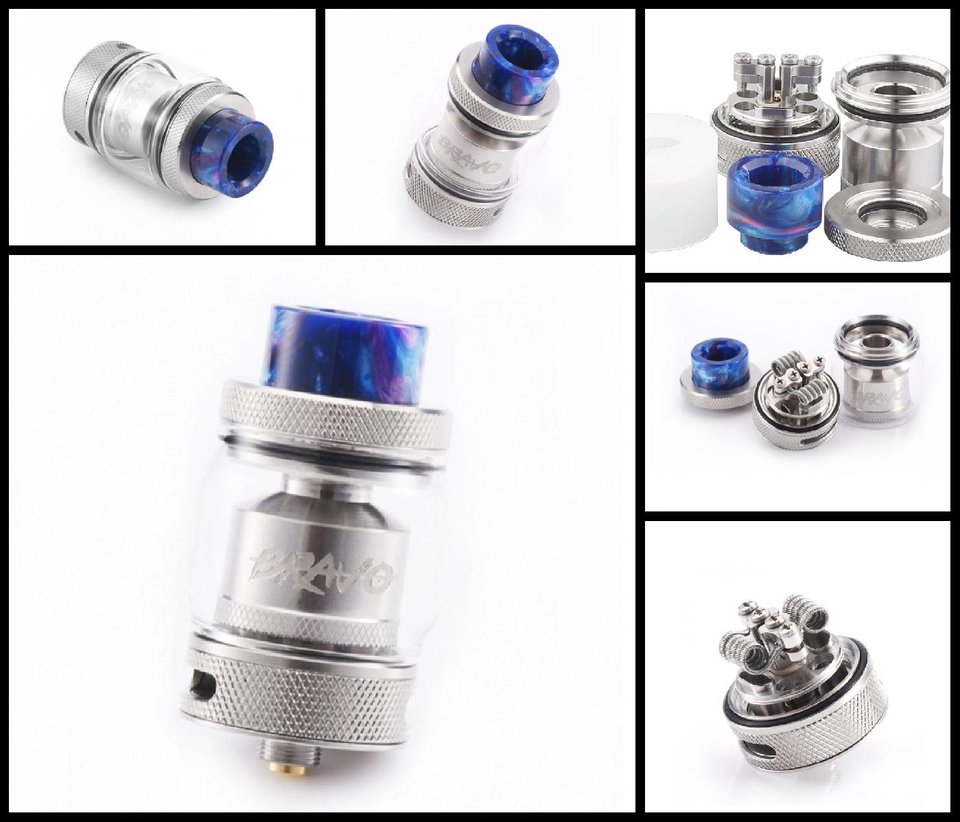 Out of the package, preinstalled in the Bravo has a silicon gasket in the tank section to comply with the 2ml capacity euro rules, which should be removed.

Wotofo includes lots of spare glass which is great. It comes with a 4ml glass installed and a spare of the same size but it also comes with a 6ml bubble glass that actually looks good! It isn't super fat in the middle but even width from top to bottom which is is a nice touch from Wotofo.

Prominently featured all over the edges of the Bravo is hatched knurling, which really works here. Not only does it provide good grip on every rotatable surface but it also has a pretty good aesthetic.

The Bravo comes with a color matching acrylic 810 drip tip which sits flush against the top of the tank which is unscrewed for accessing the top fill.

Building the Bravo is pretty straight forward thanks to its two post clamp style build deck. All there is to do is lower the clamps using the top mounted phillips screws, slide in the coils on both sides and adjust, then reclamp the post and clip. Each clamp holds two leads, so preclipping the coils is an option.

Clamp decks can be a bit awkward to use for beginning builders but it shouldn't be too hard to adjust to using.

On the deck are two wide, rectangular, bottom airflow ports, which should hit the entire width of the coils for maximum flavor production.

There are four individual wicking ports cut into the deck to drop the wicks through the deck and into the tank for even and consistent wicking. It is OK to leave the wicks long as they will just soak up the e-juice from the bottom like an RDTA.

Combined with the bottom airflow on the deck is very wide adjustable side airflow slots. Leaving the adjustable airflow at wide open is unnecessary due to the smaller width of the inner airflow and is a bit loud.